PowerBlock: A Power Switch for the Raspberry Pi

The PowerBlock is an add-on board for the Raspberry Pi (version 1, 2, and 3) models A+ and B+. It provides a microcontroller-based power-switch functionality. 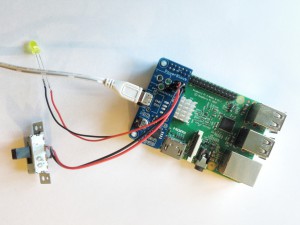 This article describes the PowerBlock itself, as well as how to connect a power switch and how to install the driver.

The PowerBlock provides a power switch functionality. Why might this be of interest for you? The Raspberry Pi comes without a power switch. As soon as you plug the micro USB cable into the RPi, it turns on. If you want to shutdown the Raspberry Pi, you need to call a shutdown command to to bring the system into a state in which you can safely remove the USB cable again. If you just pull out the micro USB cable your file system might become corrupted and you might possibly loose data.

Here are a top and bottom view of the PowerBlock PCB: 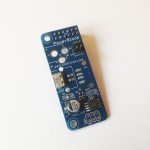 The hardware interfaces of the PowerBlock are described in the following:

Assembly of the PowerBlock

Assembly of the PowerBlock? Not needed – it comes fully assembled. You only need to connect a power switch and, optionally, an LED. This is described in more detail in the following.

The PowerBlock has pin outs for an optional status LED that indicates the power state of the Raspberry Pi. You can directly attach an LED to the pins that are marked with “LED”. You need to pay attention to the polarity of the LED: The LED pins are marked with “+” and “-” for that.

The LED will blink in four different patterns that depend on the power state of the Raspberry Pi:

The power switch functionality of the PowerBlock is controlled with the GPIO pins 17 and 18 of the Raspberry Pi:

The PowerBlockService is an open-source driver for the PowerBlock. It provides a service for interacting with the power button signals as well as for mapping attached game controllers to corresponding game pad devices on the Raspberry Pi. The installation only takes a few steps and is done from command line. In the following, this is described in more detail.

The command-line installation consists of these steps:

To be able to successfully build the driver you need to have certain APT packages installed:

The following commmands for the command line do the above steps:

You might need to reboot your Raspberry in order to have all needed services running.

The above installation procedure is also shown in this video. Please note that, other than in the video, you need to install g++-4.9 as described above:

The following video shows the PowerBlock in action:

If you are interested in getting the PowerBlock, you can find it in our shop.